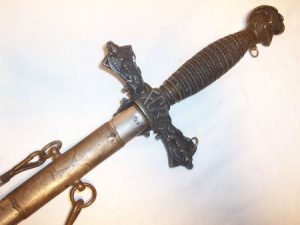 The Order bases its lessons and builds it ritual largely on the familiar story of the friendship of Damon and Pythias, who were historical characters living about four hundred or more years before the beginning of the Christian era. They were members of a school, founded by Pythagoras, who was known as the father of Greek philosophy.

To become a member of the Pythagorean Brotherhood, certain very rigorous tests were demanded and applied, some of which are very similar to the ritualistic work of our order today. The object of the organization was the moral uplifting and purification of society. Strict morality, absolute truthfulness, honor and integrity were thoroughly inculcated in the minds of its membership. It was a maxim of Pythagoras that the two most excellent things for man were “to speak the truth and to render benefits to each other” The outstanding feature of the society, however, was the marvelous friendship and loyalty which bound the brotherhood together with hoops of steel, which was so remarkably demonstrated in the incident which forms the historic basis of our order.

Pythias had opposed the pretensions of the king of Syracuse, who had gained the throne by fraud, and as a result he was condemned to death. Damon became a hostage for Pythias, while the latter was permitted his liberty to bid his wife and child goodbye. Each was willing to die to save the other’s life. Their loyalty to each other, the adventures that beset them, and the outcome of this noble friendship, form the basis for one of the most beautiful stories of history as exemplified in our ritual.

John Banim, Irish poet and dramatist, wrote a play based on this friendship, which was first produced in London in 1821, and has since been staged many hundreds of times.

Familiarity with the Banim play encouraged Justus H. Rathbone to organize a fraternal order on the basis of such friendship. Its first small group of members took the vows of the new order with their hands placed upon a pocket Bible that had been given Mr. Rathbone by his mother. This Bible is still cherished as a treasured relic of the Order, and many thousands of others have been privileged to become members in what is known as “Rathbone Bible Classes” the original Bible being used to obligate them.

In the Order’s ritualistic work, every sentence has a meaning and every paragraph a beautiful and inspiring lesson. The flag of the country has an honored place at every meeting and the Holy Bible is the supreme Book of Law. The Order does not seek to shape any man’s creed, but Pythianism is the practical application of religious and charitable principles to every day life. We have a heritage of which we are proud and our precepts and teachings lead men to higher ideals of life. We invite like minded men of good character to join us in making these ideals the dominant factor in modern living.

The Fraternal Order of Knights of Pythias and its members are dedicated to the cause of universal peace. Pythians are pledged to the promotion of understanding among men of good will as the surest means of attaining Universal Peace. We believe that men, meeting in a spirit of goodwill, in an honest effort of understanding, can live together on this earth in peace and harmony. We seek those who agree with this belief, and have a belief in a personal Supreme Being, to join our ranks in an effort to reach “Peace Through Understanding”.